Solar in the United States Versus India 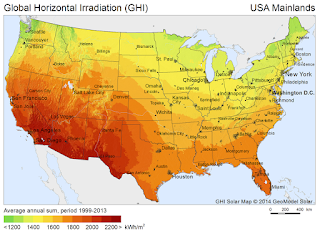 American Solar
Solar has a long way to go in the United States. In 2015, it made up a measly 0.6% of the electricity generated (EIA). In addition to that, of the 4,000,000,000,000 (that's four trillion) kilowatthours of electricity, about 67% of generated was from fossil fuels. There's a lot of room for growth, especially in the American southwest as you can see from the map.


Here are some fast facts:

All of the points above were pulled from the Solar Energy Industries Association's Industry Date.

The US is undeniably a solar leader in the world. Of the top 10 largest solar photo-voltaic projects in the world, the US has 6 (Wikipedia)! Our top six projects crank out 2,700 MW. To give you an idea of the scale, 1 MW could power 1,000 homes.

The US has a long way to go in terms of percentages. Remember, only 0.6% of its electricity comes from solar whereas Germany produced 50% back in June 2014 (Triple Pundit). But it's tough for the US to move too aggressively in this direction. Besides, it has massive reserves of coal in Appalachia, oil in Alaska and off-shore, and natural gas all over the place. 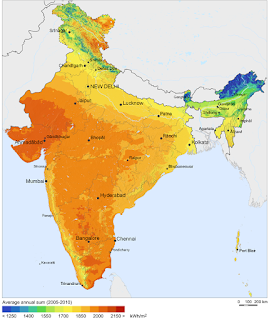 Indian Solar
While the US has it made in terms of energy, India has been hustling for decades to meet the needs of its 1.2 billion people. The energy consumption in India is the fourth biggest after China, USA and Russia (US Debt Clock). The energy produced doesn't come close to meeting demand.

The government's awareness of its energy deficit is pushing India to invest, invest, invest in new power sources. I wouldn't be surprised if they start snagging a few of the US's spots on the 10 largest solar photo-voltaic projects.

It is also important to understand that India has been a global renewable energy leader. The country was the first in setting up a ministry of non-conventional energy resources in early 1980s. Solar currently makes up 14.59% or 6,763 MW of India's renewable energy, excluding hydro (Renew Indians). Wind comes in at 66%. India expects to install a total of 100,000 MW by 2022 (Business Standard). That's just six years from now and that's 14 times what they currently have!

I've been lucky to correspond with one of the companies at the tip of the spear, Su-kam. They've been servicing rural residences since 1989. Su-kam installs the solar panels, the wiring, the inverters, and most importantly, the batteries. Batteries play a critical role because they allow users to be independent of the grid--a grid which has experienced some major outages.

Conclusion
For now, the US enjoys the top spot in total renewable energy. However, India's needs are pushing it to be a fierce competitor. Let's check back in 2025. I bet this will be a very different looking analysis.
at 7:55 AM