Boating and Biking in Amsterdam—Solar Style 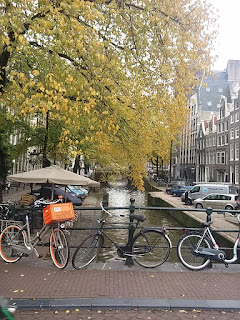 I was recently travelling in Europe and saw a lot of solar. While I was there, the world’s first bike commuter path (figure 2) with embedded solar cells was celebrating its first birthday. Al Jazeera reports that the 70-meter test track near the town of Krommenie (a suburb north of Amsterdam) is a success. “A Dutch project to turn the nation’s bike paths into energy-generating solar roadways has just cleared its first major test with flying colors.”

The project is still developing, and is not without problems, but the idea is that this concept will someday help create roads that generate the same power that electric cars use to travel on them.

SolaRoad has been in the works since 2009, and is the brainchild of Dutch research institute TNO. The power-generating pavers are created by embedding crystalline silicon solar cells in 8.2 x 11.5 ft concrete slabs, before covering them in a one-centimeter layer of tempered glass. Then, reports the Guardian, a “non-adhesive finish and a slight tilt are [added] to help the rain wash off dirt and thus keep the surface clean, guaranteeing maximum exposure

There are at least three times more bikes than cars in the Netherlands with nearly 22,000 miles of bike paths. Imagine the power if all of these paths generated this kind of glow-in-the-dark solar power!

As I pedaled from my Airbnb room to the Anne Frank house, I rode along a canal and noticed the local boaters taking advantage of solar energy—in this case, the moored boat gets energy from the solar panel bobbing on the tethered buoy (figure 1).

Later in the day, I took a one-hour cruise around the perimeter of Amsterdam. While I waited for my boat, I noticed several tour boats collecting solar energy (figure 1).

And although this next project is still in the concept phase, take a look at what Dutch solar energy (Royal HaskoningDHV) is slated to accomplish in the near future: The Tilting Locks.