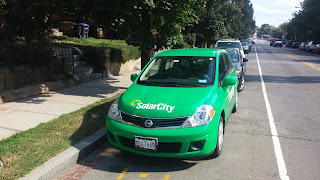 This SolarCity Nissan was parked up by Columbia Heights at 13th and Lamont. In my four years and constant biking in DC, I've only seen a handful. I'm sure my fellow solar energy enthusiasts are seeing more SolarCity cars in the company's home state of California and in the American Southwest (see map below). DC isn't seeing a lot of SolarCity because its small residential market has already been penetrated by businesses like Solar Solutions LLC. Also, it takes a LONG time for utility provider Pepco to connect solar systems to the grid (EQ Research).

This is one of the sales cars, probably making sales in the much friendlier Maryland market. Maryland is a big solar market--just look at the roofs--and I've spoken with reps at SolarCity who say they're expanding aggressively in that state. As a whole, SolarCity is at just over 6,000 employees. They'll be doubling that soon and we'll be seeing a lot of that on the East Coast.

SolarCity is the number one installer of residential solar in the United States. They've done very well with their solar leasing model. It has a wide base of network installers that run around in vans and saves the company a lot of money. The vans are green and have similar markings to this one.

I've tweeted at SolarCity to get an idea of how big their fleet is but haven't heard anything back yet. If anyone has any more information about this, please let me know!

Update as of Sept. 11: SolarCity got back to me on Twitter and said they have 75+ warehouses with each warehouse location averaging 55 vehicles. If my math is correct, that's 4,125 SolarCity vehicles!
at 9:13 AM
Location: Columbia Heights, Washington, DC, USA