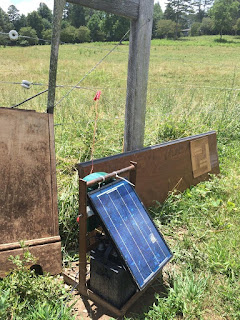 This fourth of July, I went down to Asheville, NC to visit my brother and his fiancee. On the last day, we were driving around Warren Wilson College to catch some pastoral views. All of a sudden, my brother came to a halt and said, "Andrew, I've got something for your blog!" He pointed out the car window to a small solar panel charging an electric fence.

The property was easily a few acres and my brother Danny explained that the owners were using rotational grazing--a process whereby livestock are strategically moved to fresh, partitioned pastures to allow vegetation in previously grazed pastures to regenerate. The solar powered electric fence allows rotational grazing for a lot cheaper than a wooden or metal fence.

Solar is key in remote areas because although it takes little electricity to charge the fence, grid electricity is not easy to come by. If it's not already being done, I bet solar powered electric fences will be a common practice across the globe.

Here's a practical thought. If the electric fences in Spielberg's 1993 Jurassic Park were solar-battery powered, they could have contained the dinosaurs. The character Dennis is able to shut down Isla Nublar's entire grid system in an attempt to smuggle dino eggs off the island. This centralized grid is not resilient to Dennis' attack and it wouldn't fare well with weather-, dino-, or hacker-related interruptions. A decentralized solar-battery grid would be much more resilient.

In closing, here's the exact location of this solar powered electric fence. Thank you Danny for catching this one!
at 9:14 AM
Location: Swannanoa, NC, USA