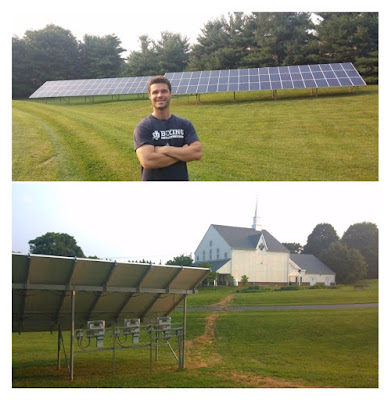 On June 30, I visited the United Church of Christ of Seneca Valley in Germantown, MD. Bill Renner, who handles church operations, took me on a tour. Bill was incredibly welcoming. He picked me up and dropped me off at the Shady Grove Metro, gave me an extended tour, and was even game for an interview, which you can see on my Youtube channel.


The project is a 25kW ground-mounted solar system. To give you an idea of the scale, the average home uses about 29 kWh per day (US Energy Information Administration). That means that in one hour of sun, this church produces enough electricity to power an average American home for a day.

If you think this was easy, it wasn't. The process took three years--elongated by a solar contractor that backed out. These panels were just installed in early June and the Montgomery County inspector approved the conduit trench shortly after--you can see the dirt left over from the trench in the bottom photo. The system was going online a couple weeks after my visit. Solar Solution LLC (I've seen a lot of them around DC) swept in and took on the project. They're champs and have a good reputation with Bill and everyone else with whom I've talked. When in doubt, call Solar Solution.

What makes this church special is that it's the first ground-mounted system I've seen and in the past two years, Bill has retrofitted all of the interior and exterior lighting with LEDs. These guys are green. Bill was also proactive. He reached out to me with a detailed description of the project. This is above and beyond.

Finally, understand that this church is part of a larger movement--the Interfaith Power and Light’s (IPL) and as you can see on my blog, I've visited four other members of IPL. Churches are solarizing like crazy around DC. This has a ripple effect on their members and the surrounding communities. They also get great deals on installations. Expect to see more.
at 11:23 AM
Location: United Church of Christ of Seneca Valley, 13421 Clopper Road, Germantown, MD 20874, USA