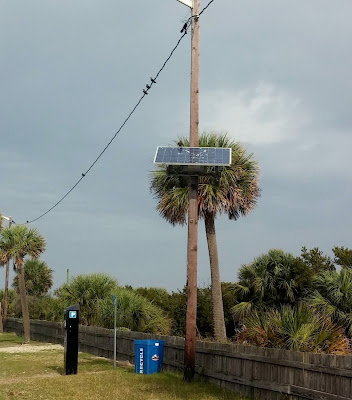 On Dec. 29, I went to Tybee Island, GA with my mom. This was a mini vacation after spending the holiday with family in Asheville, NC.

Tybee was a familiar place for me. During the summer of 2008, I spent 8 weeks in neighboring Savannah working at St. Mary's, a group home for children. I would often go with the kids out to Tybee Island for field trips and days at the beach.

When my mom and I arrived in Savannah, we watched a short documentary on its history. One of the places mentioned was the 144 foot tall Tybee Lighthouse, one of seven surviving colonial era lighthouse towers in the U.S. This was something we both decided we wanted to see.

In the late morning of the 29th, we were out touring the lighthouse grounds when I spotted above solar panel.

The panel is standard size (64.5 inches by 39 inches; 60 cells; around 270 W of power). However, what made this panel unique was its terrible location. I've seen a panels in a number of locations; on trashcans, traffic counters, roof tops, parking meters, churches, stream flow gauges, sinks...even on light poles. However, in over a year of reporting on solar, I have never seen one directly under a telephone wire. Big time #solarfail.

Although the panel is receiving a lot of sun and correctly facing south, the birds are excreting all over it from their perch on the telephone wire. Bird droppings, like shadows from trees or cracks in the crystalline greatly reduce the panels efficiency. In this case where the crap is dispersed over multiple columns and rows, my best bet is that the panel's efficiency is reduced by half. In addition to that, bird scat is corrosive--look what it can do to the paint of a car! This was just one of a dozen similar #solarfails I saw on the Tybee Lighthouse grounds.

Since starting my solar blog, I've seen bird feces planted on panels here and there but never like this. Most of the installations I've seen are on rooftops or in the middle of parking lots where bird can't sit above them and bomb them with their waste juice. The only way I could see there being a problem for roof panels is if they were next to berry trees (holly for example) where they could be splattered with bird chunk. Another possible way would be if they were under some major migratory path and getting bombarded by Canadian goose turds.

All guano aside, this is not the first time I've seen tensions between our feathered friends and solar power. A year ago, I read about Ivanpah, the utility-scale solar park that was actually cooking birds mid-flight. The Californian park uses 350,000 giant mirrors to reflect sunlight onto towers loaded with boilers, which then generate steam. This concentration of light can reach up to 1,000 ° Fahrenheit and can fry a bird like an ant under a magnifying glass.

As I was writing this piece, I decided that the tension between birds and solar power deserved an original Microsoft Paint sketch. I hope you enjoy my amateur artwork below.

In conclusion, Tybee Island has a couple of options: move the panel out from under the wire or leave it and install plastic birds of prey. I'm not even charging for those suggestions. 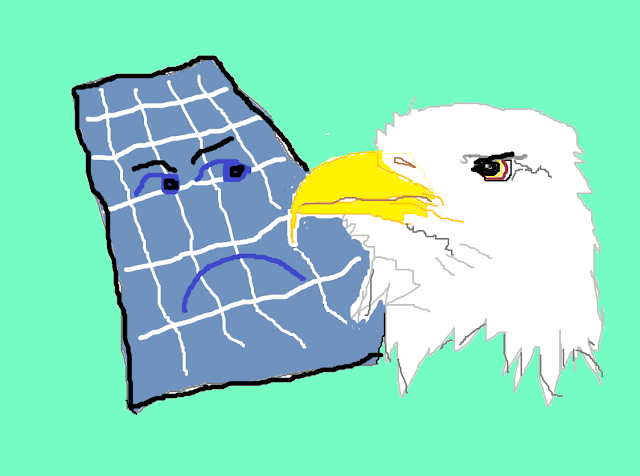